Kevin James in the Zookeeper.

Don’t miss the two most hilarious parts of the movie:

(The following information is from the DVD movie jacket.)

Don’t talk to the animals … unless they talk to you first!

All the animals at the Franklin Park Zoo love their kind-hearted caretaker, Griffin Keyes (Kevin James). Finding himself more comfortable with a lion than a lady, Griffin decides the only way to get the girl of his dreams is to leave the zoo and find a more glamorous job to win her over. The animals, in a panic, decide to break their time-honored code of silence and reveal their biggest secret: they can talk! To keep Griffin from leaving, they decide to teach him the rules of courtship – animal style!

(Also featuring the voices of Cher, Nick Nolte, Adam Sandler and Sylvester Stallone  – {who are the voices of the key animals at the zoo}.) 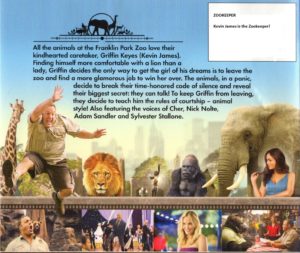 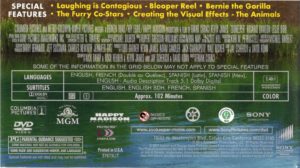