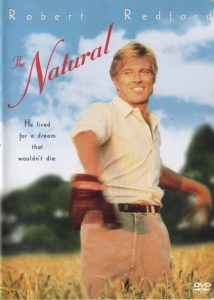 We rated this film 4 stars!!! Baseball movie lovers would agree. This is an excellent movie to watch and with a PG rating. It has so many great actors in this picture, Robert Redford, Robert Duvall, Glenn Close, Kim Basinger.

(The following information is from the DVD movie jacket and inserts:)

"This is a film filled with magic, wonder and awe." Los Angeles Times

Pulitzer Prize-winning author Bernard Malamud's first novel, The Natural, was published in 1952. An allegory in the guise of a baseball story, the book was considered unfilmable, too difficult to translate into a workable screenplay. In 1976 Malcolm Kahn and Rovert Dean decided to take a chance and acquired the film rights. A screenplay was written by Phil Dusenberry, but the project remained in limbo until 1979, when Columbia Pictures' story editor Roger Towne was asked to try his hand at adapting the fable. It would the firs to several drafts.

Over the next few years, many actors – including Jon Voight, Michael Douglas and Nick Nolte – expressed interest in the project, but no deal was ever consummated.

THE NATURAL finally came together with the formation of TriStar Pictures in the early ‘80s. The new studio sent Towne’s third draft to Robert Redford, who had not made a movie since directing Ordinary People (1980). Impressed, the actor brought the script to Barry Levinson (Diner), who agreed to direct Redford in the film.

As the start date neared, Levinson and his crew began searching the country for a sutable ballpark that resembled a 1930’s stadium. Eventually, the found what they were looking for in Buffalo, New York’s War Memorial Stadium, built between 1935 and 1937 as a New Deal relief project, and the then-current home of the Buffalo Bisons. Beginning with the start of production on August 1, 1983, it also became home to the New York Knights.

Buffalo also became home to THE NATURAL. Originally, the filmmakers planned to shoot sonly the baseball sequences in the city, with the remainder of the picture to be made in Hollywood. Their plans soon changed.

Patrick Markey, production executive: “Buffalo was a city of great wealth in the 20’s and early 30’s, and much of its architecture is beautiful. We kept finding places that were perfect for our script.”

Production designer Mel Bourne discovered the Masten Street Armory, a huge structure tha would not only house the film’s production offices, but would also become the home to an editing room, wardrobe department, casting department and a sound stage that contained four sets: the knight’s locker room, the Judge’s office, Max Marcy’s press box and Iris’ apartment. Other locations included the Buffalo Psychiatric Center (Roy’s hospital), the Grand Court of the Elliot Square Office Building (a Chicago hotel lobby) and the Parkside Candy Store (a Chicago ice cream pallor). The Hobbs farm and Iris’ house were found in nearby Stafford New York. The carnival sequence, where Roy strikes out “The Slammer”, was filmed in the South Dayton. Production in Buffalo was completed in mid-October; cast and crew returned to the Laird Studios in Culver City, California where the remaining scenes were shot.

A mythic look at the American dream, THE NATURAL has been interpreted on many levels, from a sports film to a warning on the dangers of success. But perhaps it’s truer meaning lies on a deeper, more existential plane of thought.

Comment by Roger Towne, the film's screenplay writer:
"Even the most gifted and most natural people are hurt by the capriciousness of fate. Yet they are often given a second chance to make up for the past. This is what The Natural is about."