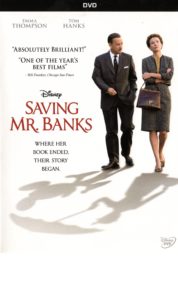 “ONE OF THE YEAR’S BEST FILMS” Bill Swecker, Chicago Sun-Times

WHERE HER BOOK ENDED, THEIR STORY BEGAN.

Tom Hanks and Emma Thompson bring to life the untold true story about the origins of one of the most treasured Disney classics of all time. John Lee Hancock (The Blind Side) directs this acclaimed film, which reveals the surprising backstory behind the making of Mary Poppins.

Determined to fulfill a promise to his daughters, Walt Disney (Hanks) tries for twenty years to obtain the rights to author P.L. Travers (Thompsn) beloved book. Armed with his iconic creative vision, Walt pulls out all the stops, but the uncompromising Travers won’t budge. Only when he {Walt Disney} reaches into his own complicated childhood does Walt discover the truth about the ghost that haunt Travers, and together, they set Mary Poppins free!