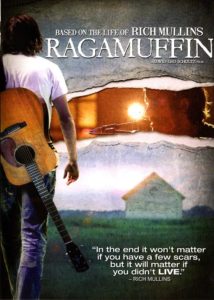 Our Recommendation and Comments: We highly recommend this movie for mature adults.

One of the major song hits that Rich Mullins wrote is “Awesome God”. We think this movie has been under-rated and under-appreciated. We hope to encourage a resurgence of interest in this movie and we plan to promote it in the Raleigh, NC and the Saint Petersburg, FL areas.

This movie shows again, the importance of Dads. So many of our dysfunctional families in the world are due to either the lack of a father figure (children being raised by the mother only) or an abusive or non-loving father.

Ragamuffin is similar in many ways to the recent movie "I Can Only Imagine" which was about another music writer and artist who also had a rough upbringing with his father. If you liked that movie, you will like Ragamuffin.

When you watch this movie in the movie theater or on the DVD, make sure you watch the credits at the end as well, because you will get a glimpse of the real Rich Mullins and one of his funny stories.

WARNING: This movie is NOT RATED but we would rate it a PG-13 for Language and the serious subject matters of drugs and dysfunctional child rearing.

The Dove Foundation (dove.org) cautions for Language and Drugs.

(From the DVD jacket:)

HIS LIFE WAS A WHIRLWIND

HIS MUSIC WAS HONEST
HIS FAITH WAS RECKLESS

RAGAMUFFIN is based on the true story of Rich Mullins, a musical prodigy who rose to Christian music fame and fortune only to walk away and live on a Navajo reservation and to minister to the people.

An artistic genius raised on a tree farm in Indiana by a weathered, callous father, Rich wrestled all of his life with the brokenness and crippling insecurity born of his childhood.

A lover of Jesus and a rebel in the church, Rich refused to let his struggles with alcoholism, addition and women tear him away from a God he was determined to love.

As he struggled with success in Nashville, depression in Wichita, and oblivion in the Four Corners, Rich became one of the first of his time to live honestly amidst a culture of religion and conformity.

Amy Grant encouraged Rich Mullins and helped promote his songs. She also encouraged the songwriter, Bart Millard, in the recent new movie, "I Can Only Imagine".