NIKKI and THE STRANGER movie series

NIKKI and THE STRANGER 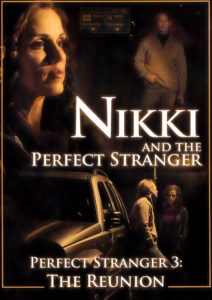 NIKKI and THE STRANGER

To be completely reviewed.
Quick Review: This is another Perfect Stranger movie. And like most sequels it is not as good as the first and second movies. However, it is still very much worthwhile to watch.

Nikki Cominsky is a successful lawyer - troubled by the fact that her lief isn't perfect. One day a mysterious invitation shows up on her desk that reads "You are invited to a dinner with Jesus Christ."

Thinking it's a prank, she shows up...only to find herself in the middle of a whirlwind evening of debate and reflection - with the most unforgettable man she would ever meet.

(Based on the best-selling novel by David Gregory.)

"In every persons life, there's a stranger we all know."

This first of THE STRANGER movies is the best. This first film is a series of short episodes, about 30 mins each, are great for a Bible study or family entertainment Good for older teenagers and adults. You may want to preview these before showing to younger children. And be prepared to explain and answer your children's questions about these episodes.

This series are episodes of a real, physical Jesus visiting people today to encourage them in their daily walk in life. The series almost always involves a walk with Jesus. Parts are humorous but the episodes are always dramatic and enlightening. Some excellent dialogue can be found in this mini-series made for TV with people asking Jesus some tough questions about pain, sickness, prayer and their weak faith. And Jesus asking them some tough questions. At first people do not know it is Jesus - that is why the title The Stranger.

My favorite episode is THOMAS based on Jesus calling into a Talk Show program and talking with a sarcastic radio personality.

The Woman At The Well

A woman (Stephanie Vickers) struggles with the concept of not being perfect because both her family and her church disapprove of her lifestyle.

A young man (Brad Jackson) turns his back on a family fortune and winds up sleeping in an alley.

A grad student (Amy Hess) faces a daily challenge in an outspoken professor (Percy Metcalf) and his agnostic viewpoints.

A boorish radio talk show host in Chicago (Tom Luce) berates his listeners on a nightly basis: Tonight's Topic: "The Insanity of Faith".

A conservative senator (Melisa Combs) is reluctant about casting the deciding vote on a landmark abortion bill.

A teenager (Alexis Hughes) grow weary of being harassed for her beliefs by her mean-spirited classmates.

In the sequel to "The Perfect Stranger" (based on David Gregory's second novel), Nikki's daughter Sarah, now 19 and heading West for college, is at her own spiritual crossroad. To further complicate matters, her mother has recently mad a startling revelation about dining withThe Almighty.

Thinking her mom is certifiably insane, sarah strikes up an unlikely friendship with a travel companion who shares her disdain for religion.