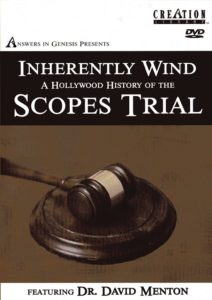 Inherently Wind movie is a Hollywood History of the Scopes Trial, commonly known as the "Monkey Trial". A critical analysis of the truth or non-truth in the famous movies "Inherit The Wind".

In one of his most popular talks, Dr. Menton exposes the distortions and inaccuracies in the play and movie Inherit The Wind. An influential propaganda piece, Inherit The Wind has deceived millions with the false belief that Christians went on a "witch hunt" to stop John Scopes from teaching evolution. In reality it was a 'set up' by the American Civil Liberties Union.

(Edited from the DVD movie jacket.)
Dr. David Menton earned a PH.D. in cell biology from Brown University. He served as a biomedical research technician at Mayo Clinic and then as an associate professor of anatomy at Washington University School of Medicine (St. Louis). For almost two decades he has been profiled in American Men and Women of Science - A Biographical Directory of Today's Leaders in Physical, Biological and Related Sciences. Dr. Menton has lectured throughout the United States and Canada on the creation-evolution controversy.

The Scopes Trial, also known as the Monkey Trial, had an extreme negative influence on the United States and religion according to Robert Godfrey, a Christian Church Hisotorian. So much so that after 1925, if you ever wonder how Princeton University changed from being a Christian Presbyterian University to the liberal university it is today - one can trace that decline to the "Monkey Trial" and specifically how it was incorrectly reported in the press of the day.