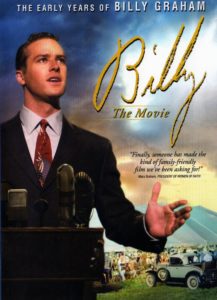 Billy The Movie, The Early Years of Billy Graham

Billy The Movie (aka Billy The Early Years)

It is surprisingly good! If you are expecting a sweet story about the early years of Billy Graham's life, this is not that movie. In fact, be cautious showing this movie to young children because of its honest portrayal of Agnosticism vs Christian Faith. It covers the difficult story of Billy Graham's friendship with Charles Templeton, a Canadian evangelist who renounced his Christian faith because he could not resolve the (1) the horrors of the holocaust with a loving God and (2) science and the Bible. The acting is excellent with the famous Martin Landau playing Charles Templeton and Armie Hammer as Billy who does a fantastic job and so does Stephanie Butler as Ruth. The photography is excellent and they did an excellent job with the 1930-1950's clothes, cars, etc.

Occasionally I like to tell you about good family movies when new ones become available either at the movie theaters or on DVDs. Recently I watched the movie called "Billy the Early Years". It is sometimes listed on the internet as "Billy The Movie". This movie is about Billy Graham's younger years starting from his teenage years working on his family's dairy farm near Charlotte, NC - through his college years and into his early years as an evangelist. This movie was not made by the Billy Graham Evangelistic Fellowship organization but was made independently in 2008. You can find more information about this movie on my website www.amovieministry.com. That is A-MOVIE-MINISTRY.COM. This movie was released in 2008 and typical of a lot of good movies, you probably did not remember seeing this being played at the regular movie theatres.

This movie is now available on DVD and you can rent it at places like Blockbuster. Now if you are expecting a sweet story about the early years of Billy Graham's life, this is not that movie. In fact, be cautious showing this movie to young children because of its honest portrayal of Agnosticism versus Christian Faith. It covers the difficult story of Billy Graham's friendship with Charles Templeton, a Canadian evangelist who renounced his Christian faith because he could not resolve the (1) the horrors of the holocaust with a loving God and (2) Chuck could not resolve science and the Bible. The acting is excellent with the famous Academy Award winner Martin Landau playing Charles Templeton and Armie Hammer as Billy who does a fantastic job and so does Stephanie Butler as Billy Graham's wife Ruth Bell and the famous Lindsey Wagner playing Billy's mother and Jennifer O'Neil playing the reporter. And if you like country music, you should recognize Josh Turner playing George Beverly Shea. Also Kristoffer Polaha does a good job portraying young Charles Templeton. The photography is excellent and they did an excellent job with the 1930-1950's era clothes, cars, etc.

This is an excellent movie and I can highly recommend it for older teenagers and adults. This movie is rated PG but like I have said, this movie may not be suitable for younger children because this movie honestly covers the relationship between Billy and one of his friends, Charles Templeton. Billy Graham met Chuck Templeton after college when  the famous Torrey Johnson introduced them and encouraged them to tour and evangelize together. Charles Templeton became Billy Graham's mentor. Chuck showed Billy how to preach to large audiences. Believe it or not but Billy Graham was a terrible preacher when he first started out as an evangelist. But Billy Graham steadfastly believed that the Lord was leading him to be an evangelist in spite of his early failures and Billy was always enthusiastic and hopeful. So Charles Templeton showed Billy how to evangelize but Charles Templeton eventually renounced his Christian faith because he could not resolve the horrors of the Holocaust with the concept of a loving God. However, Billy never gave up on Chuck and prayed for him and always considered Chuck to be his friend and even defended Chuck against accusations that he was a hypocrite during the time he was a Christian evangelist but Billy defended his friend and said that Chuck had integrity because he honestly admitted that he had developed serious doubts about the Christian faith and that Chuck was honorable in stepping down from his position as a pastor and as an evangelist.

I personally liked this movie because in many ways I was like Charles Templeton - I found it difficult to resolve science and the Bible and why does evil exist. But after years of research, I found no conflict between science and the Bible. In fact, I found out that the conflicts between science and the Bible was due to misinformation promulgated by college professors and the liberal media. And the simple, short answer to Why does evil exist? is free will. I wish I was able to talk to Charles Templeton before he developed Alzheimer's disease and died in 2001. Some of you may remember that it was this same Charles Templeton along with Torrey Johnson and Billy Graham that founded the famous Youth For Christ organization in 1946. Chuck, who did not have any formal training in Christianity, made the fatal mistake of attending Princeton Theological Seminary in 1948 so that by 1957, Chuck renounced his faith. What a sad event and shows us the bad influence of these liberal organizations like Princeton Theological Seminary.

Also I personally believe that Charles Templeton is in heaven. I believe his conversion as a young adult was genuine and that God in his mercy and grace has forgiven him for his backsliding as he was exposed, like we all were, to the onslaughts of misplaced scientific skepticism during the last 50 years.

Now this movie was not produced by the Billy Graham World Wide Pictures and so the children of Billy Graham were concerned how their father and mother would be presented in the movie. And they were pleased and satisfied with the movie. Gigi Graham, the eldest daughter of Billy and Ruth Graham endorses this movie. Here is one of her quotations about this movie:

"My two greatest concerns before I saw the film were 1. Would the Gospel of Jesus Christ be presented clearly? And 2. Would this film present daddy and mother in a positive way? I was very pleased that yes, the Gospel is clearly presented and my daddy, my mother and the ministry are all presented in a most positive way. "

So rent or buy a copy of Billy The Early Years. You will enjoy the movie.