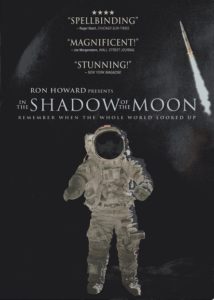 There are only 2 things that the liberal Ron Howard(*) has done that we like: (1) his directing the film Apollo 13 and (2) this follow up presentation of his called In the Shadow of the Moon.

(Information edited and enhanced from the movie jacket.)

"An astonishing absorbing, exhilarating trip to the outer reaches of the heavens. This is the closest any of us will ever get to experiencing one of the humankind's most noble adventures." Jeffery Lyons, NBC's "Reel Talk"

"Indescribably moving ... an artful blend of eye-popping footage from space ... one of the best films of the year ... don;'t miss it." Leonard Maltin, Entertainment Tonight

In The Shadow of the Moon is an intimate epic, which vividly communicates the daring and the danger, the pride and the passion, of this extraordinary era in American History. Between 1968 and 1972, the world watched in awe each time an American spacecraft voyaged to the Moon. Only 12 American men walked upon its surface and they remain the only human beings to have stood on another world. Now for the first time, and very possible the last, In The Shadow of the Moon combines archival material from the original NASA film footage, much of it never before seen, with interviews with the surviving astronauts who emerge as eloquent, witty, emotional and very human.

More information about this film:
Parts of the film are in Black and White.
Widescreen 16:9.
Winner 2007 Sundance Film Festival: World Cinema Audience Award for Documentary

Special Features on this DVD:
* An exclusive message from Ron Howard
* Scoring Apollo: A special feature with composer Phillip Sheppard
* Deleted and extended scenes with over 60 minutes of stories from the astronauts never before-seen footage from the Apollo missions
* Trailers
* English and Spanish subtitles (CC)
* Enter a Contest for your chance to win a trip to the Space Camp at the US Space & Rocket Center www.spacecamp.com/Moon